How did our group become interested in Epigenetics and Muscle Memory?

Importantly, we were able to confirm this phenomenon, where we were the first to report a molecular mechanism for muscle ‘memory’ at the DNA level in a muscle cell model, showing aged muscle cells retained molecular ‘tags’ to their DNA (via DNA methylation) in later-life following early-life inflammatory stress. This publication (Sharples et al., 2015, Link) was the highest-scoring output from this source. Importantly, in 2016 this work resulted in a prestigious Doctoral Training Alliance UK, PhD scholarship  (R. Seaborne) and culminated in further grant success with pharma industry giant GlaxoSmithKline (GSK) to investigate the genome-wide epigenetics of muscle growth and memory in animals and humans.

At that time, in collaboration with Prof. Jarivs (LJMU) we also published a paper in international journal FASEB J (link) establishing novel epigenetic mechanisms of disuse atrophy (muscle wasting) and recovery in rodents using both transcriptomic and epigenetic analysis.

Overall, leading us to want to study epigenetics and muscle memory of both positive (exercise) and negative (disuse, inflammation, ageing) encounters.

Epigenetics and Muscle Memory of Exercise

The Scientific Reports paper received international attention where the press release gathered 40,000 reads on the university webpage and was picked up by over 32 news outlets including; Science Daily, Yahoo News and Newsweek. IFLScience also published the story (25 million followers on Facebook) and it was the top story in Reddit on the day of the article (over 24,000 upvotes). The paper has now received over 1,699 tweets on social media from over 1299 different users, with an upper bound of almost 4 Million followers (Altmetric score of 1241) and has been featured on several radio, videos & podcast platforms. Including an article in the New Youk Times. The paper was the editor’s choice in epigenetics, also ranked 1st in all Cell/Molecular Biology articles (out of 664) and the 6th of ALL articles (out of 18,000) in 2018 in the Nature Journal, Scientific Reports. As a result they created a Nature video of the work on their YouTube channel DOI: 10.21203/rs.2.17320/v1, Link, that has been viewed almost 200K times on twitter. Finally, in Feb 2020 they Nature conducted an author interview with Sharples’s muscle lab to highlight how this study came to fruition (Nature website).

To read the most recent research in this area, check out our new book: Molecular Exercise Physiology: An Introduction (2nd edition) that includes an entire chapter on epigenetics, exercise and muscle memory  Link / Buy on Amazon.

1. Does Aged Skeletal Muscle have an Epigenetic Memory of  Muscle Wasting?

We have now received (2021) a Research Council Norway (RCN) Grant for 9M NOK (1M USD) for a project entitled: Does human skeletal muscle possess an epigenetic memory of wasting? Targeting UBR5 as a therapy for muscle wasting with age. With the Primary objectives of the project: 1) We will discover if human skeletal muscle possesses an epigenetic memory of muscle wasting if muscle wasting is repeated. 2) We will test a muscle gene therapy (over-expression) targeting UBR5 during recovery from muscle wasting in aged animals, and assess if this protects the muscle from a second repeated muscle wasting encounter. This is with co-investigators  Prof. Jarvis and Dr. Owens (LJMU) and Prof. Sue Bodine and Dr. David Hughes (Iowa, USA) and Prof’s Truls Raastad and Olivier Seynnes (NIH, Norway). For more detail on UBR5 see directly below!

2. UBR5, A Novel Epigenetically Regulated E3 Ubiquitin Ligase in Skeletal Muscle Remodelling and Ageing. We have recently identified that an E3 Ubiquitin Ligase, called UBR5, previously unstudied in skeletal muscle, is epigenetically regulated (via DNA methylation) with altered gene expression after human skeletal muscle loading, unloading and reloading (Seaborne et al., 2018 Sci. Reps, PDF). We have now had a paper published characterising the role of UBR5 in skeletal muscle hypertrophy, atrophy and recovery from atrophy in The Journal of Physiology (PDF). We show that UBR5 is a novel E3 Ubiquitin Ligase important for skeletal muscle hypertrophy & recovery from atrophy after disuse and injury. Also, that it has opposite roles to other well known E3 Ubiquitin Ligases, MuRF1 and MAFbx! We use several in-vivo and in-vitro approaches in human, animals, bioengineered models and cells at the genetic, DNA methylation, gene expression and protein level to characterise this newly identified ligase in the regulation of skeletal muscle mass. Check it out! PDF. We have now gone on to knock-down UBR5 in mouse muscle tissue in-vivo that causes atrophy and reduces protein synthetic/mechanotransduction cell signalling (Hughes et al., 2021, AJP – Cell Physiology). Confirming that sufficient UBR5 levels are required for maintaining muscle mass. It is important to say that to enable this UBR5 work to be produced we collaborated across international centres with Prof. Sue Bodine, Dr. David Hughes and Dr. Leslie Baehr (Iowa, USA), Prof. Jonathan Jarvis, Dr. Owens, Dr. Illdus Ahmetov (LJMU, UK) and Dr. Robert Seaborne (QMUL, UK), without whom the papers would not have come to fruition! 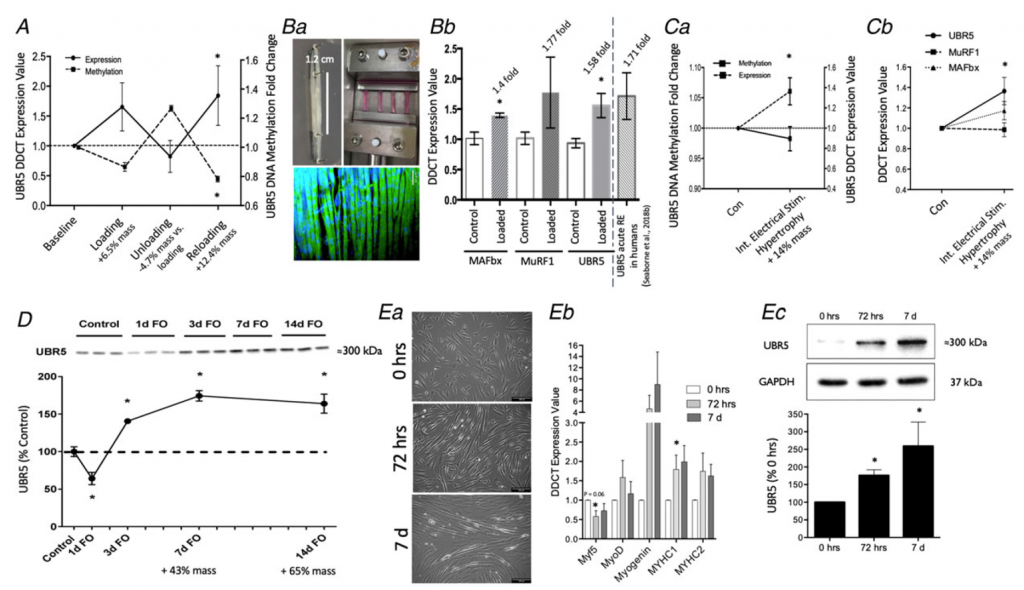